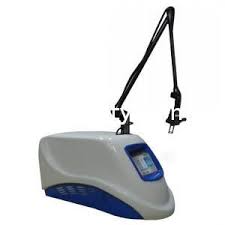 [message_box title=”Article Objective” color=”red”]The purpose of this article is to make rosacea sufferers aware that one of the most popular laser treatments available — laser skin resurfacing — can be quite harmful to rosacea skin.  In fact, in most cases, rosacea sufferers should avoid any type of laser skin resurfacing.  One of the main problems is that laser physicians and dermatologists don’t realize the damage that these types of lasers can cause when used on sensitive rosacea skin.  The only thing physicians see is an improved superficial layer of skin with less bumps, skin imperfections, smaller pores, reduced fine lines and wrinkles, and healthy young skin – the perfect “anti-aging weapon” for facial skin.  They don’t see the increased flushing intensity and duration that usually occurs a few weeks down the road.  They don’t see that the duration of rosacea flushing and flares is considerably longer.  They don’t see the new inflammation settling in… until it’s too late.   These ablative resurfacing lasers should not be used by any rosacea sufferers, those with a history of rosacea in their familial lines, those with sensitive skin and those that blush and flush easily.[/message_box] 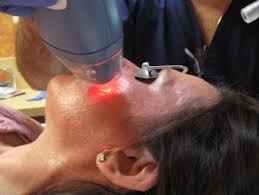 Non-ablative fractional skin resurfacing goes deep into the epidermis of the skin and stimulates the production of collagen, a protein that’s found in connective tissue. Collagen causes the skin to plump up, and as it does, the collagen fills in wrinkles and lines. The result is firmer, smoother, suppler and younger-looking skin. Because non-ablative skin resurfacing is performed within the skin rather than on its surface, there is minimal discomfort and no downtime. 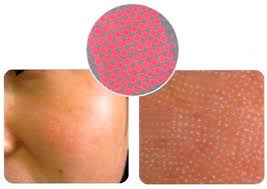 Over time, as collagen in the skin is destroyed by aging, sun damage and pollution, the skin takes on a loose, saggy and blotchy appearance. Non-ablative Fraxel laser resurfacing uses light energy to create tiny pinpricks deep in the skin that ramp up collagen production. Unlike traditional fractional CO2 lasers, Fraxel lasers can accomplish their work without damaging the outermost layers of the skin. If your wrinkles are mild to moderate, Fraxel non-ablative laser treatments can give you a younger-looking face with minimal discomfort.

Although the fractional CO2 laser works best for acne scars, deep lines and wrinkles, the non-ablative Fraxel laser treatment is a great option for anyone whose fine lines and wrinkles are not deep. Non-ablative skin resurfacing is also an excellent treatment for dark spots, sun spots and skin discolorations; it penetrates the skin and causes these spots to rise to the surface so they can be removed.

The Dangers of Using Resurfacing Lasers on Rosacea Skin

While there is no doubt that fractional lasers are excellent for non-rosacea skin, it cannot be over-stated how dangerous these can be on rosacea skin and those with pre-rosacea tendencies such as familial rosacea, frequent flushing and blushing, and hyper-reactive skin.  Everything that makes fractional lasers exceptional for regular skin lie at the heart of how these lasers can cause irreversible harm to rosacea sufferers. Just as important, 9 out of 10 physicians will perform these ablative procedures on rosacea sufferers… without a second thought.

Rosacea Sufferers Must Avoid these Treatments:

[message_box title=”Summary” color=”red”]While fractional lasers are the most popular form of laser treatment at this time and does show dramatic results on non-rosacea skin, these lasers should never be used on rosacea skin or pre-rosacea skin.  If you are one of the unlucky ones that was coaxed into treatment by a laser specialist the single best way to try to reverse the damage is to undergo a series of gentle “Vascular Laser” treatments with a combination of Intense Pulse Light (IPL) treatments and deeper 1064 YAG lasers.  This combination is your best hope for recovering from fractional laser-induced side effects.[/message_box]

Comments, feedback and online discussions below in the Comment Box help other rosacea sufferers understand their rosacea better and an informed rosacea sufferer usually finds more effective treatments… and in doing so, they may add a comment that helps you just as much.  Please contribute.